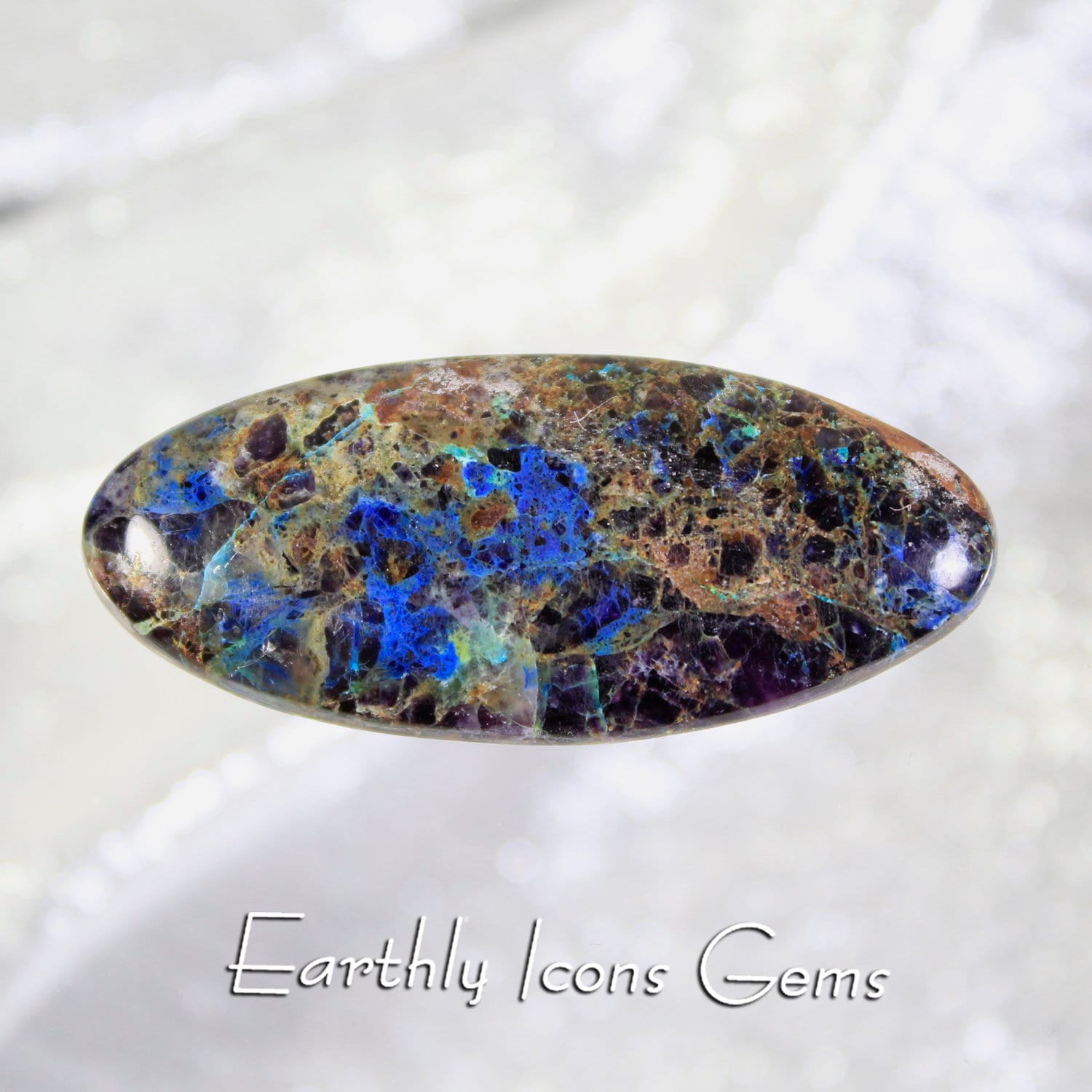 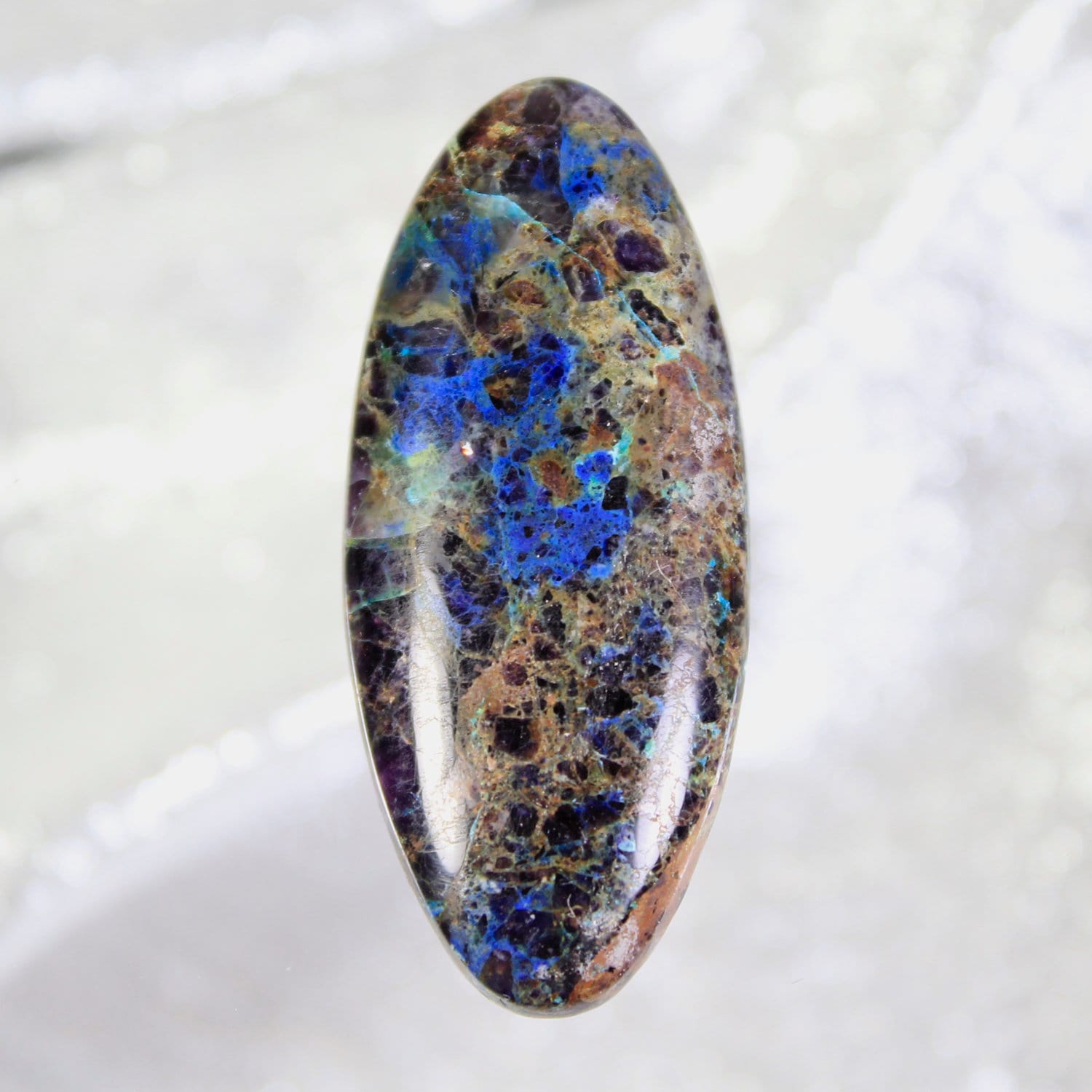 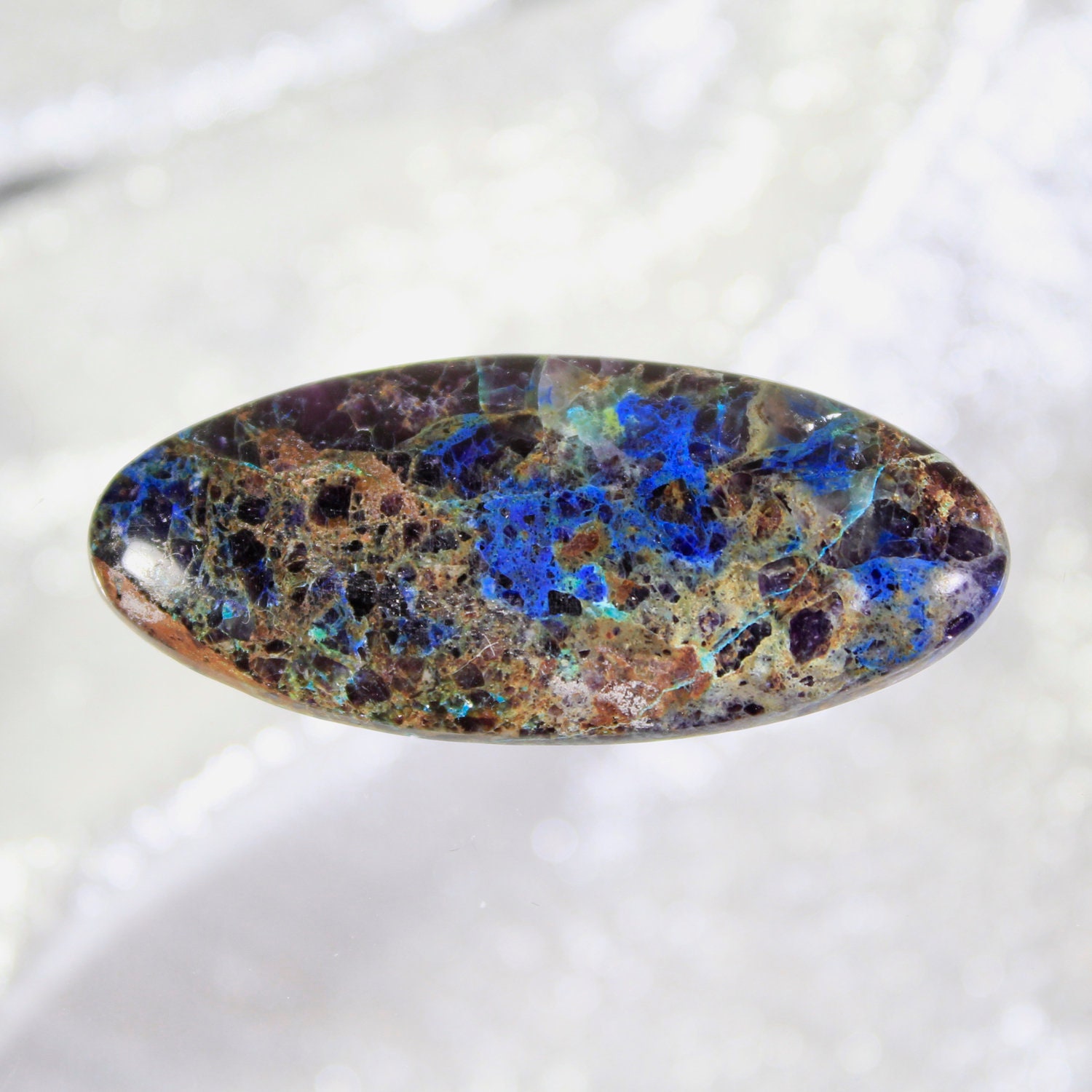 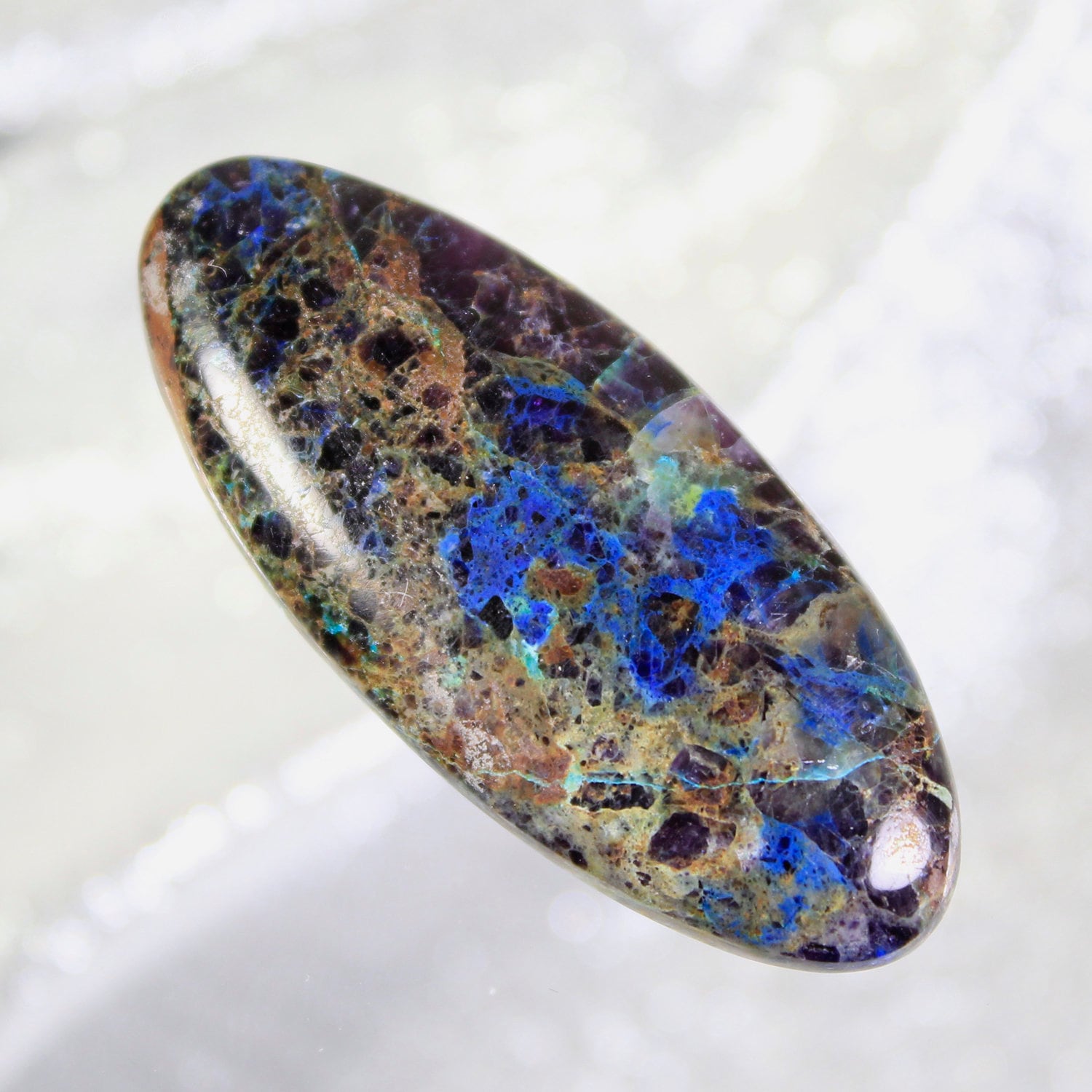 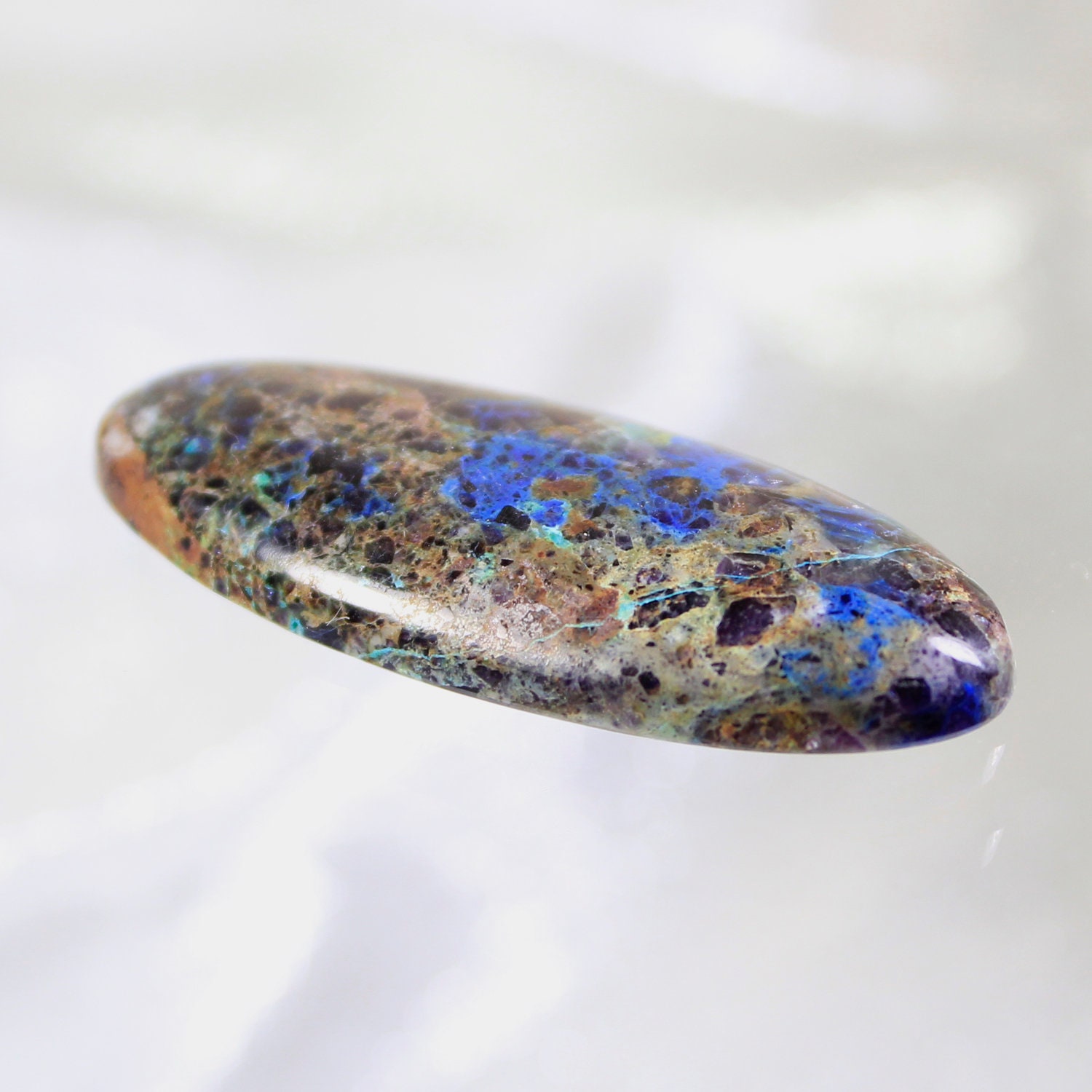 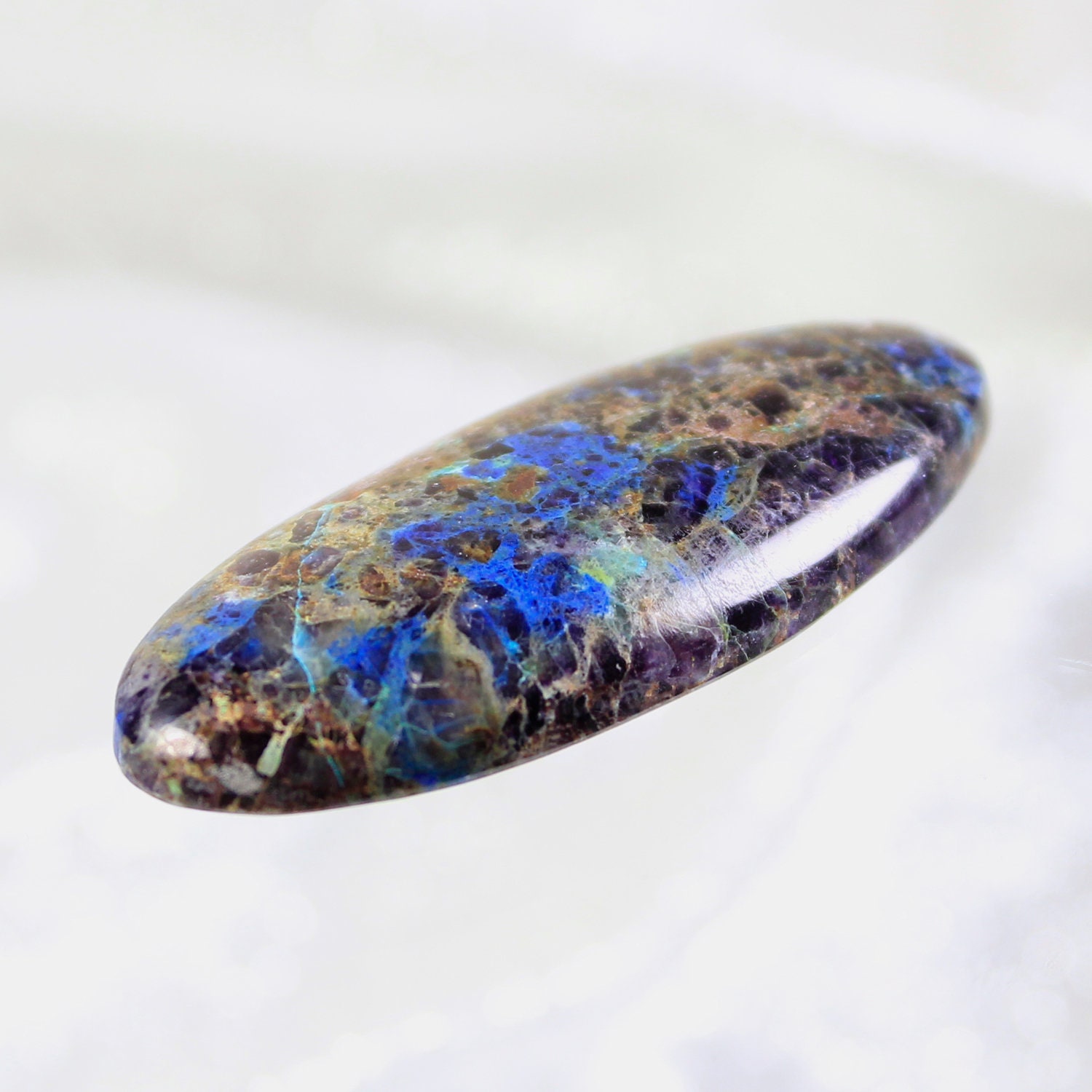 This stunning boldly colored natural Kaleidoscope Prism Stone (a naturally occurring stone from Utah), also incorrectly referred to as "Kaleidoscope Agate", has absolutely amazing colors of deep purple, deep blue, teal, green and gold in multiple shades, including amazing strong colorful splashes of Blue contrasting the deep grape Purple and truly is a Top Grade sample of this gemstone. Always an attention grabber, Kaleidoscope Prism Stone makes beautiful jewelry, but it must be noted that you should probably use it in jewelry that is not likely to be knocking into hard surfaces or encountering jarring impact. This Top Grade cabochon of Kaleidoscope Prism Stone, with it's amazing colors, will make a beautiful piece of jewelry or would be a great top shelf example of the material for any collector.

NOTE that the colors in the Kaleidoscope Prism Stone (as with pretty much any stone) will appear brightest in sunlight and may appear more muted in indoor lighting. The prismatic effect is definitely going to appear best in natural sunlight. Since photography outdoors in northern Illinois often presents problematic issues, I photograph all my items indoors with "sunlight" bulbs as to get the most accurate colors I can ;)

* On a side note, I simply want to acknowledge that there has been a bit of controversy about the use of the name "Kaleidoscope Agate", as there is also another type of stone which was found in Oregon which maintains a claim to this name. I just wanted to acknowledge the claim for the owners of the Oregon claim, who also mine a beautiful jasper which is named "Kaleidoscope Jasper", of which I have cut quite a few and even sold here in my Etsy shop. I was previously referring to this (the Prism Stone) as "Kaleidoscope Agate" because that is the name under which the rough material was sold to me. I noticed that another lapidarist has begun to refer to it as "Kaleidascope prism gemstone", which is, at the very least, certainly more accurate than referring to it as an agate, and have decided to follow her lead, referring to it now as "Kaleidoscope Prism Stone" from now on.